Remote and isolated by the most formidable mountain ranges in the World, Tibet – the ultimate travel destination - is now within your search.

Potala Palace:
The dominant landmark of Lhasa 117 meters above the city below. Construction started on the red hill in 1645 under the 5th Dalai Lama. An immense building, 13 storey high with walls 3 meters thick Containing over 1000 rooms, 10,000 shrines and 200,000 statues it was both the residence of the current Dalai Lama and tomb of the former ;Heads of state. The entire building is made of stone and wood and covers an area of 130,000 square meters. The Potala is full of elaborate art work and frescos that tell many stories.

Norbulingka – summer palace:
On the banks of the Kyichi River, there is a tree and flower filled pard known as the Norbulingka or the Jewel Park covering a total area of 360,000 square meters, the park was originally laid out in the 1750s. There are fountains, pavilions, terraces and stone tablets where visitors may rest amidst the numerous kinds of flowers and various colors. The whole park consists of two main parts – Norbulingka at the Eastern area and Jianselingka at the Western area.

Norbulingka is also the site of the summer palace of the Dalai Lamas (8th to 14th). The small palace of the 13th Dalai Lama is an odd mix of traditional Tibetan architecture and modern paraphernalia, such as a Philips radiogram and Victorian bathroom fittings! At Norbulingka you will also find the one and only zoo in Tibet.

Jokhang Temple and Barkhor market:
The foremost monastery in Tibet, built in the 7th century AD and now housing the most prized Buddhist relic, a 1300 year old Sakyamuni Buddha statue. The main section of the temple is topped with golden roofs found nowhere else except in Tibet. Watch the many worshippers pay their respects and prostrating themselves at the main gate. The monastery is encircled with the Barkhor Bazaar a sacred pilgrim path, but also a lively & colourful market where you can bargain over such treasures a ornate long-bladed knives, prayer wheels and exquisite jewelry.

Sera Monastery:
Sera is more like a small town on the outskirts of Lhasa at the base of Tatipu hill. It is the main teaching monastery and one of the three great Gelukpa 'Universities'- once housing more than 5500 monks. Here one can see the young novices learning scriptures in the Debating Garden and being rewarded for a correct answer with a resounding hand-clap from their Master, Sera is also the birthplace of Tibetan medicine.

From the roof of the monastery one can enjoy the natural beauty of the Lhasa valley to one's heart content.

Tsurpu Monastery:
Tsurpu monastery I built on the north side of the river in the Dowo Lung Valley. This is the home of Karmapa, Karmapa is the true 'living little Buddha' – the new reincarnated leader of the black hat sect. He is the only spiritual leader actually living in Tibet. The recent recognized 17th Karmapa can be visited by all visitors. Tsurpu monastery was built in 12th century. Tsurpu is the riches monastery in Tibet.

Gyantse:
Once Tibet's third most important city, lying in the Nyangchu valley along the main routes from India and Nepal to Lhasa. In former times it was a fort, the centre of Tiber's wool trade and a gateway to the outside world. Other spots of interest: Palcho monastery and the Kumbum Pagoda.

Shigatse:
Shigaste is Tibet's second largest city. It is the administrative centre for 18countries in southern and western Tibet. Besides its fiche cultural heritage, Shigatse has and abundance of native fruits and products. At the bazaar, there are more than 300 stalls selling local produce as well as colorful and elaborate handicraft, accessories, antiques and porcelains. In Shigatse one can also find Tashilumpo monastery, the seat of the Panchen Lama. The Monastery, built in 1447 by a nephew of Tsong Khapa once housed over 4000 Monks, but now there are only 600.

Sakya Monastery:
In 1073 Gongjue Jiebu of the Kun family built a monastery on the north bank of Zongqu River to teach his new esoteric theory of Buddhism. He was convinced that the monastery built on such a site would light the mundane world. Because the monastery was built by a chalky hill, it was named Sakya, meaning chalky earth in Tibetan. The Sakya Monastery built by (popular known as the North Temple) became inadequate for rising and evermore powerful Sakya establishment. A larger monastery, which is still standing today, was built on the south bank of Zongqu River by the Kun house and Pagpa, a well-known Tibetan in the Mongolian imperial court of the 13th century. This monastery, now popularly known as the South Sakya, sits against the backdrop of snow-capped mountains 165 kilometers west of Shigatse. In 1260 Pagpa was appointed the imperial tutor and later placed in charge of Buddhist affairs. Kublai Khan then appointed him ruler of Tibet.

When the visitor approaches this massive structure, he will see a great monastery in an imposing square citadel. The outer wall is painted red, white and black, each representing the different manifestations of Buddha, a unique feature of Sakya. The Lakang Qinmu Hall, the main structure in the complex, occupies an area of 5,500 square meters with a height of over 10 meters. According to monastery records, the hall had 108 giant columns. Now there are only 40 left, with many anecdotes about them. The entire complex gives a feeling of solemnity laden with the weight of history.

Samye:
Built in the mid-8th century, Samye is the first formal Buddhist Monastery with the Buddha Dharma and Sangha in Tibet. The whole construction of the monastery, for the stupas forest-like, the building high and expansive, the scale grand and broad, is designed in accordance with the shape of "mandala" layout, and furthermore, the monastery is well-known to the whole world for the highlighted and mixed perfection of Han, Tibetan and Indian architecture style in the main hall and the numerous relics such as wood and stone carvings, frescos and statues kept in the monastery. As described in a historical book, this monastery is considered "an unimaginable construction and incomparable monastery". Over the centuries it has come under the influence of the Nyingma, Sakya and Geluk schools and is thus considered a symbol of Tibet’s national identity.

Tsetang (Zetang):
Tsetang (Zetang), the birthplace of earliest Tibetans, sits on the south bank in the middle section of the Yarlung Tsangbo River Traduk Monastery is one of the earliest Buddhist temples in Tibetan history. Built in 641 A.D., it is said that King Songtsan Gampo established the temple to suppress the ogress in order to prosper his kingdom. And later it became the winter palace of King Songtsan Gampo and Princess Wencheng in Shannan. Of all the treasures and relics kept in this monastery, the pearled Tangka -- "Avalokitesvara at his rest" is the most remarkable. 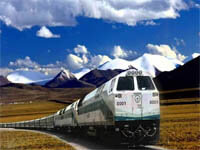 Exploration of the ancient palaces, monasteries and temples, a ride on the world's highest train, a journey to (almost) the top of ..... 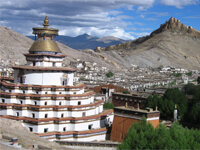 After two days of insightful cultural explorations in Kathmandu, you will take an adventurous overland journey to the Tibetan highland. ..... 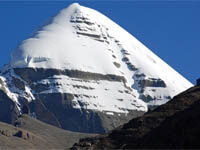 It was over a decade and half back, when a young entrepreneur freshly out of University and a vision for thembarked upon the.. 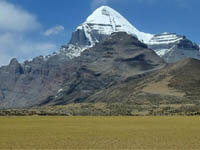